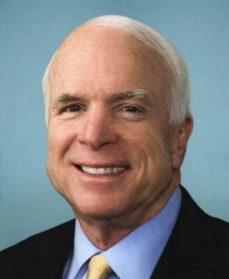 Meghan McCain eulogized her father, John McCain, at the National Cathedral in Washington, D.C., with a speech that was impassioned by grief, love, and admiration. She mourned her personal loss for the man she called her father, recognizing at the same time that his passing from this world marked “the passing of American greatness.” She defined that greatness as real and true, not just empty talk, or words from men “who will never come near the sacrifice he gave so willingly.”

Rarely, if ever, has there been clapping in the hallowed nave of the National Cathedral, however, when Meghan McCain went on to say that the America of her father did not need to be made great again, because “America was always great,” those in attendance spontaneously broke into applause.

Indeed, there has been a lot of rhetoric lately about how we need to ‘make America great again.’ I guess the conversation depends on one’s view of greatness. Just how is that defined, exactly? Great. Greatness. Merriam Webster defines the word great as “notably large in size, number, or measure.” The Oxford English Dictionary goes on to describe ‘great’ as “wonderful, distinguished, or famous.”

So the question should be asked: What purpose does ‘greatness’ serve? If we need to make America great again, great for what? Famous for what? And does a return to greatness mean we stop moving forward? That we reject inclusion, generosity, diversity, or a global awareness? Without purpose, ‘great’ is an empty word, full of self-importance and braggadocio.

We think of greatness in terms of nations, but what about the individual citizen? Those who serve a purpose that is greater than themselves, the people who make this world a better place?

Navy pilot John McCain was shot down over North Vietnam in 1967, breaking both arms and a leg when he ejected from his plane. He was captured and imprisoned in the infamous “Hanoi Hilton,” where he remained a prisoner of war until his release in 1973. The wounds that he sustained, along with the torture and mistreatment he endured, left him with lifelong physical disabilities, yet he still burned with a desire to serve the country he sacrificed for; the country he loved.

He served during a particularly turbulent era in our nation’s history. The 1960s and early 70s were a time when young Americans such as McCain were fighting in Vietnam, while others protested, and still others were joining a radical new organization called the Peace Corps. Black activists, marching in Birmingham, Alabama were attacked with fire hoses and police dogs; while idealistic young men and women risked their lives as Freedom Riders to ensure people of color were allowed to vote. In 1968 Martin Luther King and Robert Kennedy were assassinated. That same year the Apollo Astronauts traveled to the far side of the moon.

It was a decade of contradictions, of racial tension, war, riots, and scientific achievement. It was also a decade of idealism, purpose, and service, whether that meant service in the military, or service as a civilian. During the time of McCain’s imprisonment, another young American also served her country, working and living in Baghlan, Afghanistan from 1968-70. As a representative of the United States, she served in the Peace Corps, taught English and medicine in a small adobe schoolroom, worked in a hospital without running water, and established a school of nursing for Afghan girls. Her dedication reflected what was best about our country—our generosity, inclusiveness, and force for good in the world. Her story is one of thousands of similar stories. They are part of our heritage, our American history, our treasure.

John McCain understood that service can be as diverse as our nation. He endorsed this notion by stating: “It’s not just the military. We have the Teach for America program. We have AmeriCorps. There are many avenues of service, and there is nothing nobler than serving a cause greater than your own interest.” (AneriCorps.gov, July, 2015)

When former senator Joe Lieberman stepped to the podium to eulogize his longtime friend, he spoke of John McCain’s deeply held belief that there is a special satisfaction that comes from “serving a cause greater than yourself.” For McCain, that cause was America— the America of our “founding values, freedom, human rights, opportunity, democracy, and equal justice under law.”

Former President George W. Bush echoed those same sentiments. He noted that McCain didn’t see our country just as a physical place or power, but as the “carrier of enduring human aspirations. As an advocate for the oppressed. As a defender of the peace. As a promise, unwavering, undimmed, unequaled.”

Former President Barack Obama spoke of McCain’s understanding of a fundamental truth, that America’s security and influence in the world have been won not just by military power or wealth, but from our “capacity to inspire others with our adherence to a set of universal values. Like rule of law and human rights, and insistence on God-given dignity of every human being.”

What better way to honor John McCain, Obama noted, than to recognize that “there are some things bigger than party or ambition, or money, or fame, or power.” There are principles that are worth fighting for, values that are worth risking everything for, and truths that are enduring. “At his best, John showed us what that means. For that, we are all deeply in his debt.”

One thought on “Remembering John McCain”